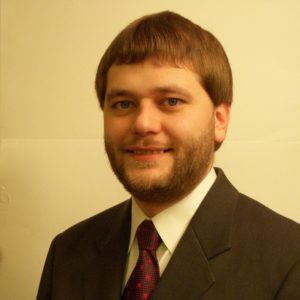 Dr. Robby Simpson is a System Architect for GE’s Grid Solutions, where he guides architectures for grid modernization. Accordingly, Robby divides his time between designing and evaluating GE’s Grid Solutions’ architectures with particular attention to scalability, security, and interoperability and standards bodies’ activities. Robby has been engaged in the smart grid industry for a number of years, particularly in the areas of distributed energy resources, AMI, metering, demand response, and home area networking, and has been heavily involved in accelerating standards for smart grid interoperability.

Robby is active in IEEE (he is a member of the IEEE SA BOG, Chair of the IEEE SA CAG, and Chair of IEEE P2030.5), ANSI, IEC, IETF, SEPA, and the Zigbee Alliance. Through these efforts, he not only helps to accelerate standards development, but also ensures the adoption of those standards within GE and the market as a whole. Robby received his B.S. in Computer Engineering from Clemson University and his M.S.E.C.E. and Ph.D. (Electrical and Computer Engineering) degrees from the Georgia Institute of Technology (Georgia Tech), where he focused on Internet measurements, large-scale simulation, network protocols, and information security.

Prior to focusing on smart grid, Robby worked on satellite communications at MIT’s Lincoln Labs. Robby has published several refereed conference and journal papers on topics ranging from network measurements, network security, and network simulation to superconductor behavior. Robby has also received numerous awards for his academic and industry efforts and is an Eagle Scout (and still believes it to be worth mentioning all these years later). In his spare time, Robby enjoys horseback riding, playing table tennis, traveling, and spending time with his family. For more information, please visit http://www.robbysimpson.com

All presentations by Robby Simpson

DER Networks and Cybersecurity: Coming To Your State In 2022