On day two of #isna2020, Sullivan Solar and Sol-Up went head-to-head in the final round of the Solar Games for the inaugural championship and a $5,000 prize. The two teams competed against each other in the first round of the games with a grid-tied system using Tesla Powerwalls and SMA America inverters but faced a new challenge this round: installing an off-grid system.

With 90 minutes on the clock (and AC/DC playing in the background), the two teams raced to install PV modules provided by JinkoSolar, then paired with a charge controllers by MidNite Solar and AGM batteries by Rolls Battery. Each team proved to be strong competitors, competing neck-and-neck every step of the way. Sol-Up pulled into first place by earning 10 bonus points by finishing under 75 minutes. Sullivan Solar finished just as the final buzzer alarmed and spectators applauded both teams’ impressive performances. Both completed their systems nearly identically—even making the same minor battery connection infraction—and yet, accumulating more points, the Las Vegas-based Sol-Up was named first-ever Solar Games Champion.

The final system also used Everest Solar Systems for racking components and AIMS Power for the off-grid inverters. At the end of the Solar Games, the equipment was donated to Twende Solar, a non-profit organization that will use the components on a solar project for a children’s home in Peru (among other projects in the US).

State level renewable energy goals continued to be a prominent theme during Wednesday’s sessions. Alex Eller of Navigant Research, Alex Morris of CESA, Salvatore Minopoli of Highview Power, Wendy Prabhu from Mercom Capital, and William Sproull from ESS Inc. shared insights on the challenges and opportunities that exist for the 130+ US cities that have committed to a 100% carbon-free or renewable energy future. A key takeaway was the importance of policy to support and drive accelerated renewables deployment.

Industry professionals were eager to continue conversations about energy storage. During the session “Beyond Lithium-ion,” Andrew Tanner of Yotta Energy, Joseph Adiletta of 24M Technologies, and Justin Raade of Highview Power examined the future of both lithium-ion and non-lithium-ion based battery technologies. As the cost of lithium-ion continues to drop and mass electrification expands––adding new sources of demand to the grid––energy storage deployment will continue to surge. Speakers made predictions regarding the effects of this surge on the proliferation of non-lithium-ion battery technologies.

Attendees had the opportunity to learn about applications of emerging solar technologies during the session “Floating Solar – Technology, Construction, and Anchoring.” Antoine Scoliege, Chris Bartle, and Bertrand Colin of Ciel et Terre, Charles Gery of Seaflex, and Doug Berry of Solar Renewable Energy shared lessons learned from real-world applications of a fast-growing segment of the solar industry.

Wednesday’s educational sessions spanned both the conference rooms and the expo floor, with the Energy Storage and Innovation & Application theaters.

Eric Wesoff, pv magazine’s US head of editorial, moderated the roundtable featuring NEXTracker, We Recycle Solar, GCL System Integration, and Recycle PV Solar to share insights on the sustainability challenges for cleantech. “I’m looking at this industry and don’t want it to have a black eye,” Kristina Whitney from Recycle PV Solar explained. “Every 90 seconds, a solar system is installed in the US. 95% of solar systems in Europe are recycled—90% in the U.S. are not.”

Alex Zhu from GCL System Integration warned against an impending issue for the EV marketplace. Zhu explained that automakers ship more and more EVs each year—and with it the number of batteries that will need to be safely repurposed or recycled at the end of their useful life on the road. The panelists discussed different battery chemistries, citing cobalt batteries as a profitable product to recycle while lithium-ion phosphate tech is not as expensive as lithium to extract.

The renewable energy industry has reason to be optimistic in the coming years, according to the results unveiled today from the Wood Mackenzie whitepaper, Solar + Energy Storage + e-Mobility: Betting on the New Energy Trifecta. Ravi Manghani, Head of Solar Research at Wood Mackenzie, took the stage at the Energy Storage Theater to present key highlights from the whitepaper that examines the overall renewable energy market. Key findings include:

After a full day at the San Diego Convention Center, attendees were invited to hear the industry’s comedians at the Solar Comedy Slam, the solar industry’s first-ever stand-up comedy competition. Fourteen comics took to the stage, sharing industry insider jokes and adding a bit of humor to #isna2020 attendees’ networking experience. 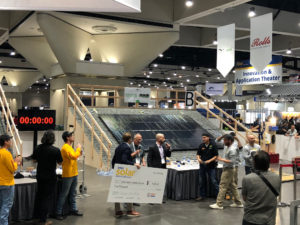 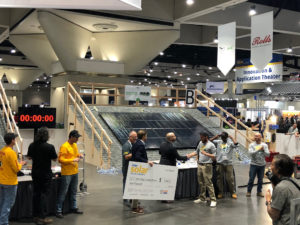 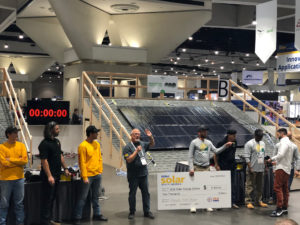